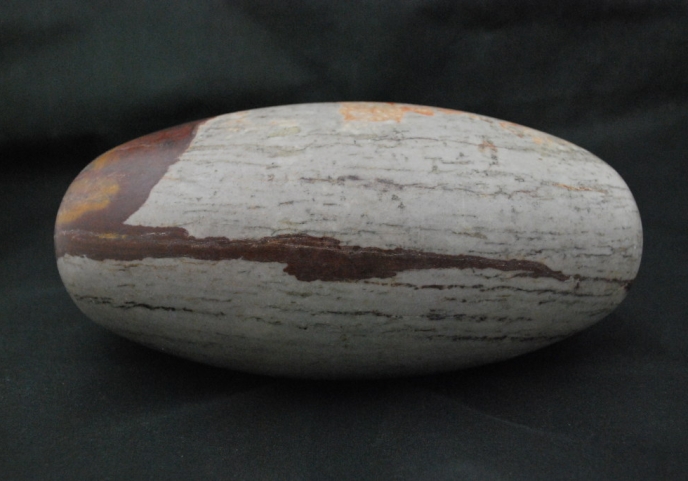 T he Shiva Lingam stone is a sacred stone of both the ancient and modern worlds. They are found in the Narmada River in Onkar Mandhata, one of the seven holy sites of India. Shiva Lingams are egg-shaped stones made of cryptocrystalline quartz.

The shape represents the male or masculine energy, while the pattern represents the female or feminine energy. Each stone is unique, no two are alike. Lingams are very smooth, due to natural river-tumbling. Sand also represents the primal element of Earth, the phallus the primeval power of the male God Shiva, the soft texture the wise feminine goddess energy. The stone embodies the wisdom of the deities brought to Earth.

This stone facilitates releasing all that you have outgrown. It is particularly useful for emotional pain that arises from early childhood, especially from sexual abuse. It can draw a sexual-healing partner to you.

While it is a perfect stone for creating a self-loving ritual to reclaim femininity and female power, it has also been used to reinstate trust in male energy and balance the male qualities based upon the emotions and the “yang”.

This crystal has been used to balance fluids of the body, to alleviate back pain, to assist with alignment of the spine and for disorders of the prostate. It stimulates the flow of energy throughout the body systems and meridians.

Crystal Bible
Shiva Lingam
It's only fair to share...

Ruby in Fuchsite is a lovely combination of natural red Ruby crystals embedded in pale to medium green Fuchsite. Great for […]

Strawberry Quartz balances the connections between the physical body and the subtle bodies, and stimulates both the astral body and psychic […]

Preseli Bluestone has a powerful magic aura, giving focus, stability and anchoring into the Earth's energy. The central ring at […]

Quartz  is the most recognized type of crystal. In fact, many people envision quartz crystals when they think of crystals, […]

Aragonite, a dimorphous form of calcium carbonate, which crystallises in the orthorhombic system, is very often twinned in its growth. […]