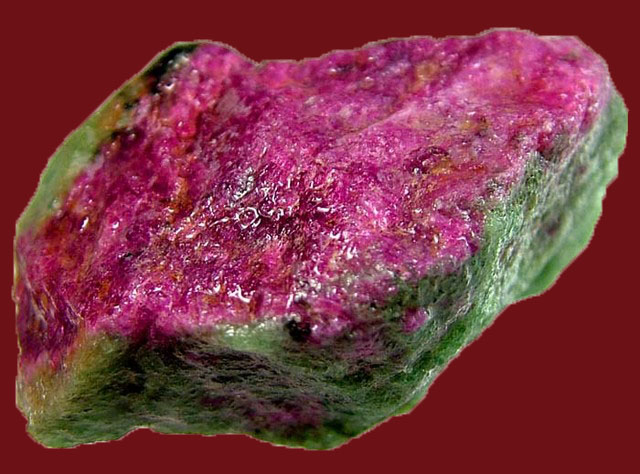 R uby is the fabulous gemstone for those born in the month of July. Ruby is the superb scarlet variety of corundum, the second hardest natural mineral known.The non-red variety of corundum is sapphire. Sapphires are well known as being blue, but they can be nearly any colour. The red colour in ruby is caused by trace amounts of the element chromium.

The word red is derived from the Latin for ruby, rubeus, which is derived from similar words in Sanskrit, Hebrew and Persian. The intensity of colour of a fine ruby is like a glowing coal, probably the most intensely collared substance our ancestors ever saw.

Rubies come from all over the world. Ruby has been the world’s most valued gemstone for thousands of years. Ruby was said to be the most precious of the twelve stones God created when he created all things and this “lord of gems” was placed on Aaron’s neck by God’s command. The Bible says that wisdom is “more precious than rubies”.

In the ancient language of Sanskrit, ruby is called ratnaraj or “king of precious stones” and ratnanayaka, “leader of precious stones”. In fact, rubies are today still more valuable and scarce than even the top quality colourless diamonds. It is no wonder they ascribed magical powers to these inner fires’ that burned eternally. The ancient gemological teachings of the East place ruby under the influence of the Sun. To be completely efficient though they should be free from all impurities, fissures and flaws.

Ruby sometimes displays a three-ray, six-pointed star. These amazing star rubies are cut in a smooth domed cabochon to display the effect. The star is best visible when illuminated with a single light source: it moves across the stone as the light moves. This effect, called asterism, is caused by light reflecting off tiny rutile needles, called “silk,” which are oriented along the crystal faces. The ruby mines of Myanmar are older than history: Stone
Age and Bronze Age mining tools have been found in the mining area of Mogok.

Ruby instills in the wearer a passion for life, truth, courage, wisdom and perseverance. It introduces dynamic leadership qualities. It emits the energy of cheerfulness and creativity. Ruby is for the pioneers, those who must go first, bravely into uncharted territory. Ruby is raw power, drive and will power.

Ruby works primarily on the genitals and reproductive organs. The glands of the body connected to ruby are the gonads and ovaries. Ruby also prompts the release of adrenaline into the bloodstream when there is danger, aggression or pain. The blood and the circulation are a focus of the ruby vibration. Muscles, which give the power to act, are also governed by ruby and of course the deep red ray is seen as raw life force, so ruby rules the blood and helps with anaemia; also it will warm the body when it is chilled and they can be used to counteract hypothermia.

Rubies have been worn in the navels of belly dancers and have been used to stimulate sexual power and potency. The signature of ruby is growth at any cost and it can be too powerful for some sensitive souls. You really have to understand the resonance of rubies to be completely comfortable in their vibrational field. If someone is stressed and irritated, avoid ruby completely, as it will inflame the condition.

The bright red scarlet, crimson and flame are clean, pure, pristine forms of ruby; when used spiritually, it is devotion that transfigures Divine love into Divine will. Ruby will stimulate the heart chakra when consciously directed, raising, then transforming the raw power of the base chakra into devotion, piety, adoration, worship, reverence and enlightened religious zeal.

Ruby works very well with those who have a strong ‘spiritual devotional’ energy to the ‘ultimate liberation’ of the human race from suffering and ignorance into enlightenment.

Ruby is the gemstone of the Cosmic Christ energy. The ruby ray activates the balanced female energy of love, nurturing, compassion, enlightened attachment, dedication to life, evolved spiritual revolution, personal freedom and joy. The Divine female energy must be ready to help, as the unbalanced male energies on this planet finish fighting each other.

Affirmation: I now allow passion into my life to burn away all obstacles on my spiritual path.

Rose quartz is one of the most pleasantly seductive varieties of quartz. The pink to rose red colour is caused by […]

The names given to the different types of agate are legion and many have local significance only. Agate nodules are of […]

Hematite is the most important iron source and is widely distributed. In addition to its use as iron ore, hematite […]

Sodalite provides for the ability to arrive at logical conclusions via rational mental processes. It helps to eliminate confusion and […]

Tektites are still poorly understood. They are irregularly - and at times elaborately - shaped nodules and blobs of a […]

Lazurite is a popular but generally expensive mineral. Well-formed, deep blue crystals are rare and valuable. It is more commonly […]

Becoming Keepers of the Crystals, a journey to share

Holding your crystal over your heart centre with both hands...relax...inhale...and journeying inward, direct your consciousness to move slowly...and gently...in a […]

The variety of quartz known as jasper is a heterogeneous mass of micro-crystallised quartz, which is heavily pigmented with colourful […]