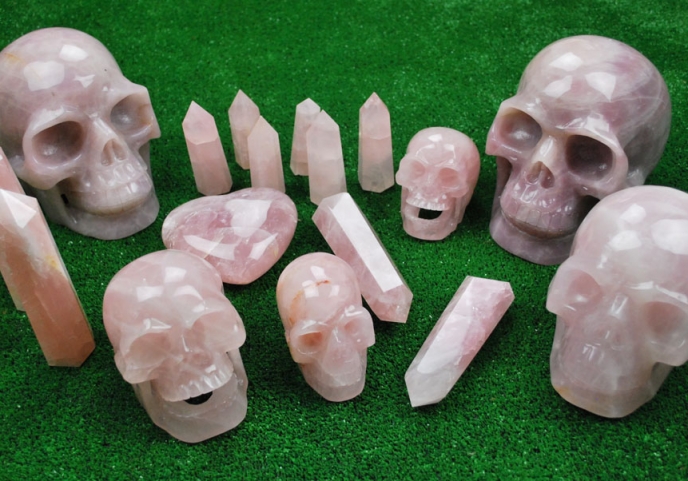 R ose quartz is one of the most pleasantly seductive varieties of quartz. The pink to rose red colour is caused by titanium and iron. Rose quartz is usually too cloudy or pale to be used as a cut gemstone, although a few exceptional pieces are found with enough clarity and colour to make fine gems. Most gemmy rose quartz is used as cabochons, where the clarity is not as important as the depth of colour. Rose quartz is also a very attractive ornamental stone and is carved into popular spheres, pyramids, healing wands and obelisks.

Rose quartz is found in Brazil, Madagascar, India and several localities in the USA. Brazil is also the only source of true well-formed crystals of rose quartz. All rose quartz was believed to be only massive, found primarily in the cores of pegmatites. This lack of crystals is somewhat of a mystery, because quartz crystallizes into well-formed crystals in all its other macroscopic varieties. So amazing are the crystals of rose quartz that the first ones discovered were dismissed as ‘fakes’ by mineralogists from around the world.

Rose quartz transmits a soft love energy, which is soothing and calming to the emotions. The vibration or resonance signature of rose quartz is good if a person has been assaulted in any way. It is wonderful to use in mid-life crisis when dissolution of old patterns and reassessment is imperative. The paler the rose quartz goes colourwise, the wider, higher and deeper the love vibration extends. The very pale natural rose is highly tuned and sensitive; it carries the promise of spiritual fulfilment.

Rose quartz is very good for children, the newborn and those yet to be born. It is also ideal for those who are giving birth to their inner child or any new venture; the red within the pink activates the energy, while the white spiritualises the endeavour.

Rose quartz can fully balance the emotional body. It is used to attune to the love vibration. The rose quartz ray works dynamically on the heart chakra, gently cleansing and then transmuting all stored putrefied negative issues of self-worth, self-confidence and self-acceptance. It contains within its beautiful pink mandala the ray of hope.

The pink warmth melts and dissolves resistance to allowing the full manifestation of love into every corner of the heart. It will allow the integration of positive energy within all levels of the chakra system, the positive energy being love, compassion, understanding of unity within diversity, bringing tolerance, forgiveness, and ultimately the complete expression of universal love and self-love to every corner of the microcosm and macrocosm. Think pink!

The guardian or Angel of rose quartz is very affectionate, deeply understanding and non- judgemental. Many people who tread the Angel path are passionately aware of the potent force of this Divine pink manifestation. It is ideal to carry and wear in stressful situations. It is good to use after operations or dental surgery. Rose quartz is comforting, it mollifies, and it is a peace offering. Pour pink on troubled waters.

It is excellent in a crisis and it has been documented many times that the wearer of a rose quartz pendant has had the stone shatter on impact of ‘bad news’. This stone really knows how to love you, it will even teach you ‘sacrificial love’. It will sacrifice itself for you; rather it breaks, than your heart breaks.

It is affordable and so useful; it is a give-away crystal. Many crystal people carry spare pieces of rose quartz just to give to others in times of stress. Rose quartz is also humble; it teaches humility by truly understanding the unconditional love vibration. It is a good ally in times of anxiety, when life is just one long struggle.

This wonderful stone has also been used to great effect to treat heart problems on all levels, those who are soul weary, Alzheimer’s disease, senile dementia, Parkinson’s disease. Great benefit has also been gained from easing the pain and speeding the healing of severe burns and scalds. It makes a wonderful gemstone essence and is said to keep the skin young and supple.

The asterised rose quartz is the most powerful gemstone of the pink ray and as such is sought after by crystal therapists and those who work as ‘channels for the Angels and Ascended Masters’. The rutile needles contained within the rose quartz structure stop any unwanted outside interference from both the physical and spiritual worlds. Rutile is used for healing and balancing the aura by repelling negative energy. It works on the physical, etheric and astral bodies.

The well-formed crystals of rose quartz from Brazil are so beautiful and seem especially focused for directing the energy of the pink ray. It has been used in gemstone essences, The energy appears to be incorruptible and unlike normal rose quartz never seems to need the same cleansing procedure, only a light cleansing with the intent.

Rose Quartz for sale at the Crystal Shop of John Armitage

Crystal Bible
Rose quartz
It's only fair to share...

Labradorite is truly fascinatingly beautiful mineral. It is a mineral whose charm is not fully noticed and may be overlooked if […]

A stone to bring one to an understanding that what one touches does not just end there, what one tastes does […]

Sunstone usually shows brilliant reflections due to inclusions (usually geothite or hematite). This mineral can be used to both clear […]

Ruby is the fabulous gemstone for those born in the month of July. Ruby is the superb scarlet variety of […]

The Shiva Lingam stone is a sacred stone of both the ancient and modern worlds. They are found in the […]

Obsidian is lustrous volcanic glass. The colour range and related names are varied. The intrinsic properties of the numerous forms […]

Rubellite (also known as Red Tourmaline) strengthens the will to understand love and to inspire tactfulness in independence, promoting creativity […]