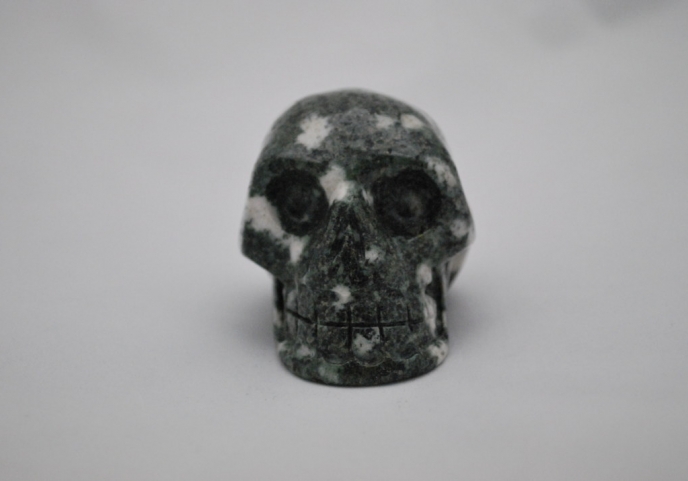 P reseli Bluestone has a powerful magic aura, giving focus, stability and anchoring into the Earth’s energy. The central ring at Stonehenge is formed from Preseli Bluestone, a spotted dolerite. Technically dolerite is an igneous rock (formed from volcanic activity) and is similar to basalt, but has larger crystals within its structure indicating that it cooled slowly when it was formed. These Preseli bluestones also contain spots or clusters or “flowers” of white plagioclase feldspar as well as augite and possibly mica giving the mysterious glittery effect seen in sunlight and some artificial light. Although called bluestones their colour is only shown truly when wet. Then they appear blue or green. Preseli Bluestones are only found in the Preseli Hills in Pembrokeshire, West Wales

In addition, Bluestone clears the Throat Chakra, aiding communication as well as assisting the body’s regulatory process. In Chinese medicine, it links with both the Heart and Stomach Meridians. Basalt and other similar volcanic rocks, such as dolerite, represent our potential, and Bluestone is no exception. Spiritually, Bluestone can be used to strip away the layers that have shaped our personality and belief systems through environmental factors, so we are able to remember the core of who we are, and through this, open our perceptions of the world around us. By letting go of old perceptions, we may be able to see the universe in all its multi-dimensional glory.

Crystal Bible
Preseli Bluestone
It's only fair to share...

Citrine is a variety of quartz, the colour being in the range from yellow to golden brown to burnt amber. Natural […]

Sodalite provides for the ability to arrive at logical conclusions via rational mental processes. It helps to eliminate confusion and to […]

Apophyllite has been used to create a conscious connection between the physical form and the spiritual realm. It facilitates attunement to […]

Lemurian Star Seeds are considered one of the master crystals, reminding us that while we are all individuals, we are […]

Rose quartz is one of the most pleasantly seductive varieties of quartz. The pink to rose red colour is caused […]

Obsidian is lustrous volcanic glass. The colour range and related names are varied. The intrinsic properties of the numerous forms […]

Crystal was a sacred substance in the mind of ancient man. The word comes from the Greek krystallos - clear […]

Hematite is the most important iron source and is widely distributed. In addition to its use as iron ore, hematite […]