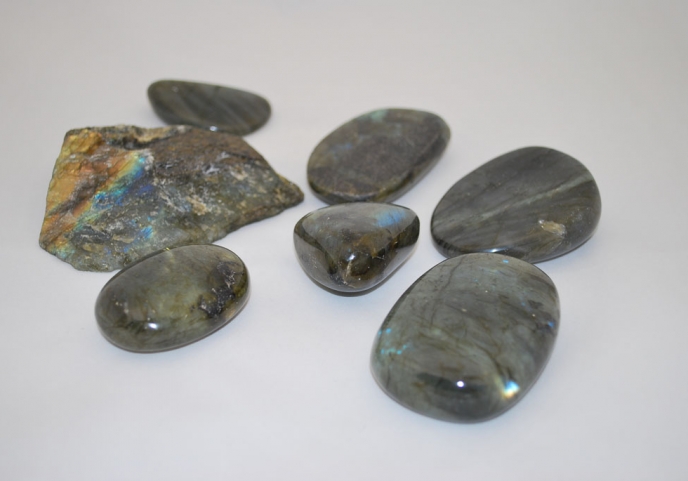 L abradorite is truly fascinatingly beautiful mineral. It is a mineral whose charm is not fully noticed and may be overlooked if not viewed from the proper position; generally a drab-looking mineral with no special virtue until the colourful schiller is observed glowing on the surface.

Labradorite can produce a colourful play of light across cleavage planes and in sliced sections, called labradorescence. The usually intense colours range from the typical blues and violets through greens, yellows and oranges. The colour display is from lamellar intergrowths inside the crystal. These intergrowths result from compatible chemistries at high temperatures becoming incompatible at lower temperatures and thus a separating and lay in of these two phases. A ray of light entering a layer and being refracted back and forth by deeper layers causes the resulting colour effect. This refracted ray is slowed by the extra travel through the layers and mixes with other rays to produce a light ray coming out that have a different wavelength than when it went in. The wavelength could correspond to the wavelength of a particular colour, such as blue.

The labradorescence is truly a one of a kind mineralogical and metaphysical encounter and must be observed in person in order to truly appreciate its beauty. Notable occurrences include Labrador (from where it derives its name), in Canada, and the Scandinavian Peninsula.

Labradorite is metaphysically known as the ‘bringer of light’, the illumination on the path. It works by dispelling darkness.

Enchanting labradorite is connected to mystery: it points to magic and esoteric knowledge via its labradorescence or luminescence. It contains the mesmerizing dark moon energies of dreaming, of altered states of reality. Labradorite asks you “Where do you go when you sleep?” then it shows you where you go when you are not you. It facilitates initiation into deep hidden sacred knowledge and past life encounters. It is a gateway to other worlds and dimensions.

Labradorite is a shape-shifter, it plays with the light, and it moves it and bends it and plays with illusion. It skilfully removes the ‘hooks and ensnarements’ of other people’s mental projections, allowing one to completely clean the auric shell of other people’s emotional debris. It removes negativity and depression that have been caused by disappointments in life. It teaches you to look beyond the visible world, to use your sixth sense. Its energy can see beyond the illusion of time and space. It can see right through you-it will expose all your flaws, shams, corruptions and shame, then it teaches you to heal them.

Labradorite heals relationships; it shows you where there is no substance, just delusion and denial. It heals the stress and anxiety related to emotional turmoil. It calms the hormones and is good for the kidneys and all fluid functions of the body. It soothes the digestion.

It has been used as a gem essence and mediation stone with the Goddess groups. It is a powerful mesmerising female ally and guide. Labradorite is here to offer you insight, clairvoyance, and truths to the questions of the universe. It teaches you to exercise your third eye, by letting your intuition guide you daily.

Why don’t you try using labradorite and keeping an intuitive journal?

Affirmation: I am enchanted as my soul illuminates my path through life.

Jade is known as a "dream stone" and as a "stone of fidelity", bringing realization to ones potential and devotion to […]

Obsidian is of low significance as a material for gemstones, but the so-called volcanic glasses provide interest for the many uses […]

Emerald is known as a "stone of successful love". It is said to provide for domestic bliss and to instill both […]

Lemurian Star Seeds are considered one of the master crystals, reminding us that while we are all individuals, we are […]

The variety of quartz known as jasper is a heterogeneous mass of micro-crystallised quartz, which is heavily pigmented with colourful […]

Strawberry Quartz balances the connections between the physical body and the subtle bodies, and stimulates both the astral body and […]

Carnelian has been historically used in Vedic astrology as a secondary gemstone to correct a badly aspected Mars energy. I […]

Gypsum is a hydrous calcium sulphate, when well crystallised producing excellent transparent monoclinic crystals, which are often twinned in swallow-tail […]

You can find out more about which cookies we are using or switch them off in settings.

This website uses cookies so that we can provide you with the best user experience possible. Cookie information is stored in your browser and performs functions such as recognising you when you return to our website and helping our team to understand which sections of the website you find most interesting and useful.