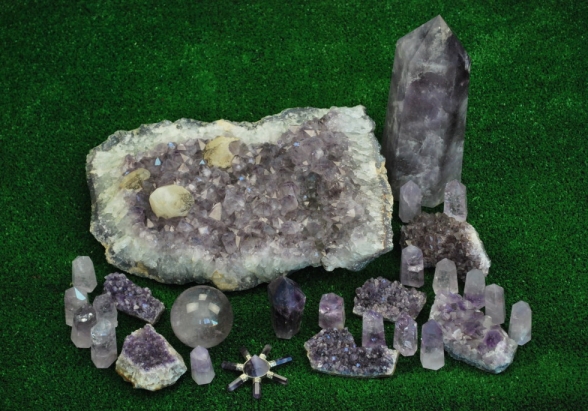 T he violet and purple varieties of quartz provide the most prized and in many respects the most interesting of the large family of quartz minerals. Amethyst, the name by which this variety of quartz is known, is of ancient derivation. Pliny stated that the gem was so called from the colour being near to, but not quite reaching, that of wine. The name is also said to have been derived from the Greek word ‘amethustos’, which is translated as ‘not drunken’, and was assigned to the stone from the belief that the wearer would not suffer from excess consumption of alcohol.

The legend of the origin of amethyst comes from Greek myths. Dionysius, the god of intoxication, was enraged one day by an insult from an insignificant mere mortal and vowed to revenge himself on the next mortal that crossed his path, creating fierce tigers to carry out his wish. Along came the unsuspecting Amethyst, a beautiful young maiden on her way to pay tribute to the goddess Diana. Diana turned Amethyst into a statue of pure crystalline quartz to protect her from the brutal claws of the tigers. Dionysius wept tears of wine in remorse for his action at the sight of the beautiful statue. The god’s tears stained the quartz purple, creating the gem we know today.

Amethyst was carried into battle to preserve the wearer from harm. As an amulet it was supposed to dispel insomnia and sharpen the intellect and it was also used as an antidote against poison. Leonardo Da Vinci wrote, “Amethyst was able to dissipate evil thoughts and quicken the intelligence”.

In Tibet, amethyst is considered to be sacred to Buddha and mala beads are often fashioned from it. In ecclesiastical communities the spiritual amethyst has always been held in very high esteem. Many of the finest quality specimens of this variety of quartz are set in the finger rings of bishops. Although amethyst is always violet in hue, the range of colour play is very wide, from nearly colourless with the faintest of mauve tinges to a fabulous deep purple. The colour is due to an iron impurity via radiation-induced effects. If the earth then heats them, they can turn brown, red or green.

Purple is a dignified colour, which has long been considered a royal colour, so it is not surprising that amethyst has been so much in demand during history. Splendid amethysts are highlighted in the British Crown Jewels; they were also a favourite of Catherine the Great and Egyptian royalty. The pale amethyst colours are sometimes called “Rose de France” and can be seen set in Victorian jewellery. The deep colours are the most valuable, particularly a rich purple with rose flashes. Amethyst is mined in Bolivia, Brazil, Uruguay and Argentina, as well as in Namibia, Zambia and other African countries. Amethyst is the birthstone for February.

‘Man is a spiritual being who, in order to be truly spiritual, needs a body’ (St Thomas Aquinas). Amethyst, with its purple polarity, truly embodies these words. It can unquestionably bring out the spiritual properties of those who wear it and work with it. Amethyst is a transformational healer, which will bring spiritual growth and Divine understanding. It purifies all the chakra centres and can be used anywhere on the body and on all levels of the aura, giving relief from addictions and addictive traits within the personality. It works as an amplifier of healing and spiritual energies. When consciously directed it will break down and transform blocked or stuck energies. Its pain-relieving properties have been demonstrated over and over again, so much so that it never seems to fail in drawing out pain.

Amethyst is a very approachable crystal and has been involved in human evolution for eons; as such, it has instigated the activation of many people into the healing properties of gemstones and minerals. The guardian or over-soul of all the amethyst on the planet is probably the most friendly of all the Crystal Angels. Time and time again, if you ask crystal therapists which was the very first crystal they used or wore, you will find the beautiful amethyst at the top of the list. It also helps protect from over-indulgences, which have lodged in the emotional body, it calms the mind and there by aids spiritual and personal growth, giving understanding into the cause of the indulgence.

Amethyst aids comprehension and enhances the faculty of judgement by stimulating the spiritual body, which ultimately brings detachment from worldly concerns. It helps you to retain a good temper, avoid errors and achieve self- discipline and high standards in life. Amethyst encourages you to become your own leader and master. It also gives a stable mind, removes outrage and anxiety and absorbs excessive body heat: as such it is very beneficial to menopausal women who are suffering from hot flushes, due to rapid changes in hormone levels.

Amethyst is full of originality and inspiration and is a great teacher. It is power and humility combined and it will instil these qualities in those who wear it and work with it. Amethyst brings spiritual dedication, which makes it a powerful and positive meditation stone.

Amethyst works on the pineal gland, the top of the head, the crown chakra, the brain and the scalp. Amethyst can be beneficial to help calm people who are emotionally erratic. It treats any kind of internal inflammation. It also treats heart palpitations and hearing disorders, the skeletal system, nervous system, immune system, digestive tract, stomach, heart, skin and teeth, insomnia, mental disorders, eye problems, headaches, migraine and pain. It is used for regression and it links to the unborn child, hence its use in infertility. It protects those who are unable to protect themselves – babies, small children, the sick and vulnerable and the animals. It also affords protection to those who are opening spiritually.

A group or cluster of amethyst will cleanse the environment of large amounts of stuck or blocked energy, easily raising the overall vibratory level to a much higher frequency of light, which is always beneficial to health. In Arabic countries it has been traditionally used to stop nightmares. In Asia it is a favourite fung shui ‘wealth cure’ it is common to see amethyst ‘caves’ being sold, as this is believed to promote harmony and abundance if placed at a “prosperity” area in the room.

Affirmation: I am full of spiritual originality and Divine inspiration

Amethyst for sale at the Crystal Shop of John Armitage

Petrified wood is ancient wood which has been replaced and hardened by another mineral. The two minerals usually involved in the […]

Calcite is a common and widely distributed mineral. It is a rock-forming mineral that is a major constituent in calcareous sedimentary […]

Citrine is a variety of quartz, the colour being in the range from yellow to golden brown to burnt amber. […]

Petrified wood is ancient wood which has been replaced and hardened by another mineral. The two minerals usually involved in […]

Preseli Bluestone has a powerful magic aura, giving focus, stability and anchoring into the Earth's energy. The central ring at […]