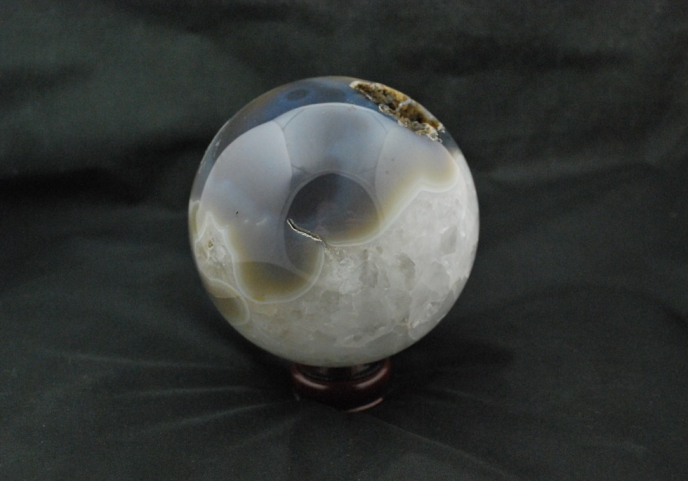 T he names given to the different types of agate are legion and many have local significance only. Agate nodules are of worldwide occurrence. Each type has its own function and therapeutic purpose. Agate was collected in the desert regions around Jebel Abu Diyeiba in Egypt over 3,000 years ago. From ancient times India has supplied agate and the material was also found along the Achates River in Sicily, a river now known as the Drillo. Many types of colourful agates are found in the United States of America. Botswana agate is the most commonly available. Agate occurs typically as a cavity filling in lavas. The layering often follows the form of the cavity and gives place inwards to crystals of quartz. Persian wizards are reputed to have invoked the power of agate to divert storms. A famous collection of thousands of agate bowls, which was accumulated by Mithradates, king of Pontus, shows how highly agate was regarded. Agate bowls were also fashionable in the Byzantine Empire. Collecting agate bowls became a common pastime among European royalty during the Renaissance and many museums in Europe, including the Louvre, have spectacular examples. The mining of agate in the Nahe River valley in Germany, which was already documented in 1497, gave rise to the cutting centre of Idar-Oberstein, Germany. Originally, the river was used to power the grinding wheels. When the Nahe agate deposit was exhausted in the nineteenth century, Idar cutters started to develop the agate deposits of Brazil, which was the catalyst for the exploration and discovery of Brazil’s rich deposits of tourmaline, topaz, amethyst, citrine and numerous other fabulous gemstones. It is said to be one of the stones used in the breastplate of the high priest. Agate amulets were used in Tibet and Nepal.

Agate is used for general strengthening, grounding, stabilizing and centering of physical energies. It can be used for universal healing, bringing vitality, and balance and inner harmony. It is slow to work, but agate is especially good for animals, plants and children. In historic times, agate was used in drinking water to heal the body; it also eliminates thirst. If you are using them ‘magically’ they should have appropriate or special natural ‘markings’ on them appertaining to and pertinent to their use.

The chalcedony anhydrous, or water agates have a unique significance; they are masses, which consist of a shell of cloudy- white chalcedony within which is sealed a quantity of water. This can often be heard splashing about when the pebble is shaken. Sometimes the water is visible. These enhydros are mostly found in Brazil. They are very useful for healing emotional trauma; this is facilitated by holding the enhydro in the receptive hand, or by placing it over any painful area of the body until all painful sensation has stopped. Enhydros can be used to heal all fluid functions of the body. They work quickly and have been successfully used in the treatment of liver disorders. The cleansing effect is very beneficial on all organs of the body. Enhydros have a cleansing, supportive, watery, female energy. They equate to the primeval waters, the symbol of the collective unconscious. Pregnant women have carried them as talismans since the dawn of civilisation.

Remarkable types of agate-filled nodules are the so-called ‘Thunder Eggs’ – a name given to them by the Native Americans. These nodules are found as spherical masses of silicified claystone and rhyolite with a star-shaped outline of agate. The thunder eggs have been used to facilitate inspiration from other dimensions and connect the user to the ‘star nations’ for guidance, insight and path working. They aid meditation, producing deep states of relaxation that would otherwise take years of practice to attain. Thunder eggs contain the energy of the storm, facilitating a synergy of energies to bring about rapid spiritual transformation.

Fire agate consists of platy crystals of an iron mineral over layers of chalcedony. When polished, the rainbow colours of the iridescent layers appear. Fire agates contain the elemental energy of fire, seen by alchemists as the source, which operates at the centre of all things, as well as the agent of transmutation, because all things are derived from and return to fire. This energy is seen as the great supernal father energy – the ‘seed’ force of the universe. It is an expression of spiritual energy and the determination of the spirit. Fire also purifies, burns and destroys the old so that new may emerge. Fire agates are used for spiritual fortitude. They have a fast effective energy, which may be used for vitality, or when you feel your energy is low. They stop ‘burn out’. They have also been used for protection: using the energy as a fire shield facilitates this. Fire agates are strong, protective and masculine in nature. They relate to the sacral and solar plexus chakras. They are useful to stabilise a ‘blown’, deformed, wide-open chakra. Successful healing ceremonies have been carried out with fire agates, as their energy quickly burns away the blocks or negative energy in the auric shell.

Green moss agate contains inclusions of other minerals, which assume tree-like (dendritic) forms. (Dendritic, is from the Greek word dendron, meaning ‘tree’). The included ‘vegetation’ is chlorite. The best location of green moss agate is the Deccan trap of India. It contains the energy of earth, is slow acting, solid, grounded, physical, stable, passive and feminine. This energy has the power of materialisation and encompasses all activities of productivity, fertility, growth and regeneration. Green moss agate is a wonderful healing stone to use in any situation where the element of earth needs to be fully manifested within the physical realm. It reconnects you back to the earth, bringing stability to all levels and in all situations. It has been used in the treatment of all fungal growths and will help support the immune system by activating the healing and balancing energies within the heart chakra. This action alone will give direct communication with the Divine through the manifestation of flowing heart energy. Animals and plants thrive in the green moss agate’s energy field. It facilitates earth-healing activities and can be used to place a Mandala on the earth for earth-healing ceremonies.

Affirmation: My body is becoming more important to me: I seek to nurture and strengthen it constantly.

A stone to bring one to an understanding that what one touches does not just end there, what one tastes does […]

Lavender Quartz: A variety of Rose Quartz. In addition to the qualities of rose quartz, this mineral has also been used […]

Tiger eye is a quartz replacement of crocidolite (blue asbestos) or of gold asbestos. The colour range includes red, brown, […]

Obsidian is of low significance as a material for gemstones, but the so-called volcanic glasses provide interest for the many […]

Garnet is a “Stone of health”, extracting negative energy from the chakras, and transmuting the energy to the beneficial state.

A scepter quartz is a large central rod around one end of which another crystal formed. It is a very special […]